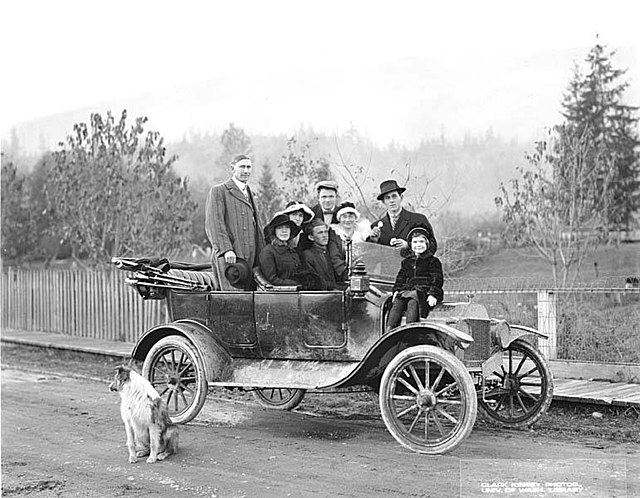 Even before the 1920s, families with automobiles
were traveling the country in ways that had been
impossible when trains were the only choice.

Family life was changing rapidly during the Twenties. So were typical family possessions. By 1922, three million American homes had a newfangled (and expensive) radio set. Seven years later, in 1929, they were in 40 percent of homes. Only 16 percent of the population lived in homes with electricity in 1912, shooting up to 63 percent in 1927.

Starting during the relatively brief wartime period, after the U.S. entered World War One, a mass exodus from the nation's cities into the suburbs began to occur. That trend continued after the war, through the Twenties, and for many years thereafter, dramatically altering the demographic patterns relating to family life and consumer behavior. The 1920s also saw the beginning of marked population shifts from the nation's farms to the cities.

Ownership was also becoming more of a possibility for many families as new-car prices dropped, up to the middle of the decade. At the same time, used cars became both more prevalent and cheaper. By 1926, there were more cars than telephones.

A 1927 survey of 4.1 million families by the General Federation of Women's Clubs revealed that 55.7 percent of the 27.5 million American families owned a car – and that a hefty 2.7 million families owned two or more. The figure was slightly lower (54 percent) in cities over 100,000 population, but markedly higher (60.5 percent) in small towns with fewer than 1,000 inhabitants. No surprise, there: even in those days, many smaller communities had limited public transportation. An automobile was indeed a necessity for most residents.

The Women's Club study, which suggested that in 1927 there was one car for every five people in the country, was considered overly optimistic by some. One critic believed that, when taking into account what might be three million two-car families, the millions of antiquated vehicles worth very little, and the large number of automobiles used for business purposes, the 55 percent figure was far too high to be realistic.

Moreover, although well over half of all families possessed a motorcar by 1929, one serious analyst estimated that not over one-third of wage-earner families owned one in that year. Of the 20.8 million passenger cars actually in use in 1929, he deduced that 14 to 15 million were owned by the 22 million non-farm families, and 9 million by unattached individuals. (Another analyst claimed that 77 percent of households owned an automobile, while one-fourth of families had none.)

With the Depression looming, some of those recently-hatched motorists would soon have to make a hard decision about keeping the car in hard times.

Geography made a difference in car ownership. In America generally, there was one car for every 4.5 persons. In California, car ownership was twice as common: one for every 2.3 persons. In 1927, the U.S. had 80 percent of the world's vehicles.

What would owning an automobile bring? Individualism, mobility (both geographic and social), privatism, control over one's environment, plus a newfound freedom of choice (and movement). Quite a lot for a machine to offer.

Rapid growth of car production brought automobiles to classes within the population who had formerly owned no private vehicle of any kind.

During the 1920s, the closed car (usually a sedan) was a prime force in bringing automobility to more families. In 1919, a mere 10.3 percent of the cars sold were closed models; touring cars and roadsters were still king. In the mid-1920s, for the first time, more closed cars than open models were produced. By 1927, a full 82.8 percent of auto sales were for closed models: roomy sedans and cozy coupes, sealing in the youngsters and their parents from the wintry storms and drenchings that had plagued motorists in earlier years.

During the 1919 to 1929 decade, real wages in manufacturing rose by 17 percent. In 1929, the average family's income reached $2,688, making auto ownership very possible indeed – if only the Crash hadn't selected that autumn to appear.

Following the 1921 Depression (a serious, but comparatively short-lived one), total employee compensation went up by 40 percent, through 1929. Yet, the cost of living rose only slightly during that same time frame. People in general, then, were indeed better off. Nevertheless, millions were without work at various times, even at the height of prosperity.

Both wages and prices were fairly stable from 1922 to 1929, but new-car prices fell through mid-decade – especially lower-end makes. The touring version of Ford's Model T dropped to a mere $290, rose to $345 a year later, then fell again.

Chevrolets started at $525 in 1923, dropping even lower the next year. In 1928, the average new car cost $876. Used-car prices also declined during the Twenties decade.

The new motorist in his factory-fresh automobile did experience one sad fact. In 1921, he could expect the value of that lovely Chevrolet or Maxwell to depreciate some 40 percent in the first year – good news for used-car buyers, if irksome for their sellers.

By the opening of the 1920s decade, ownership of an automobile was already a clear indicator of one's social position. Possessing a car was becoming mandatory for those who ranked as middle class (or wished to be thought of as such). Utterly so, for the upper levels of society; but still largely a fantasy for the working class and the financially troubled.

In the middle class and above, one's children – especially boys – already were likely to want a sporty car of their own, used if not new, more than they craved a college education.

The automobile was referred to as a "pleasure car" for many years, whether it was driven solely for that purpose or not. However, a 1920 study revealed that only 10 percent of the cars on the road were used solely for recreation and enjoyment. If not strictly for business, many of them carried workers to their places of employment at increasingly farther distances, They also provided means for earning extra income or finding employment elsewhere.

Clearly, those who had business needs for an automobile (such as farmers and salesmen) were among the first non-affluent buyers. The car could pay for itself, they calculated, regardless of initial cost and upkeep. In fact, an automobile could provide some small living for those of modest means. Itinerant workers who could somehow arrange a purchase gained personal mobility as hard times came (which they did, even during "prosperity").

In 1924, the average passenger car had a life expectancy of seven years: considerably more than the early automobiles, but not as lengthy as it would become later. The average age of a car sent to the junkyard dropped slightly by 1929, to 6.5 years, when the average car was 3.6 years old. Some 45 percent of the autos on the road were less than three years of age.

Motorists (sometimes dubbed "automobilists") were piling on considerable miles each year as the Twenties decade opened. By 1919, the average annual mileage driven was a substantial 6,300 miles – actually not far below the average 60 years later.

Unlike the advertisements of early years, which emphasized technical details and advances (generally quite true), the ads of the Twenties stressed pleasure. The famed ads for the Jordan Playboy were considered the first to adopt this course, saying nothing whatsoever about the mechanical operation of the motorcar in question, while promoting only the feeling of freedom one would supposedly feel behind the wheel. Before long, the trend was well established, and the "pleasure car" was an American reality.

Advertising appeals to women also became prominent in the '20s, perhaps beginning with Ned Jordan's famed "Somewhere West of Laramie" advertisement in 1923. Not many women yet bought a car themselves, but it was understood that they played a rising role in selection for the family.

Even those Americans who did not yet drive were to benefit from the expansion of highways and motorized transport. In 1928, the first coast-to-coast bus service was inaugurated. Railways, having provided interstate passenger transport for many decades and thought to be inviolate, retained their prominence through World War II and well into the postwar period. Eventually, though, they would face near demise as airline travel grew.

Passenger railroads never quite died, of course, but their days were numbered once most Americans took to the wheel themselves and enjoyed that real feeling of charting and following one's own course over the byways of America.

Gasoline prices varied widely geographically in 1920: as much as 2.5 times as much per gallon in New Mexico, for instance, as in the eastern states.

Auto insurance was not common in the early years. In the late teens, perhaps two-thirds of the cars in use were uninsured. By 1927, fewer than one-third had liability and property damage coverage. But during the Depression, curiously, basic insurance "protection" became more common.

A Note On Prices, Then and Now

It's not easy to compare prices and wages between the present time and earlier periods. For one thing, the "average" family of the 1920s (at least the early '20s) had no car, so a vehicle wasn't part of the cost of living. Countless other commodities either hadn't been invented or received wide distribution as yet, or were simply not part of daily life.

On the whole, though, the price ratio between the 1920s and the 1980s was thought by some economists to range somewhere between 8:1 and 15:1. (A given item cost eight to fifteen times as much in 1980 as it had in the 1920s. Rent and food price differentials between those two time frames hovered around a 10:1 ratio. By that standard, a loaf of bread selling for 80 cents in 1980 might have been 8 cents six decades earlier; and $300 monthly rent in the 1980s would be equivalent to perhaps $30 back in the Twenties.

Don't forget, though: consumer goods have changed dramatically over that century, in type and availability. So, even though they're carefully calculated and compiled by experts, comparisons can never be more than a rough approximation when you're looking at prices far back in history.