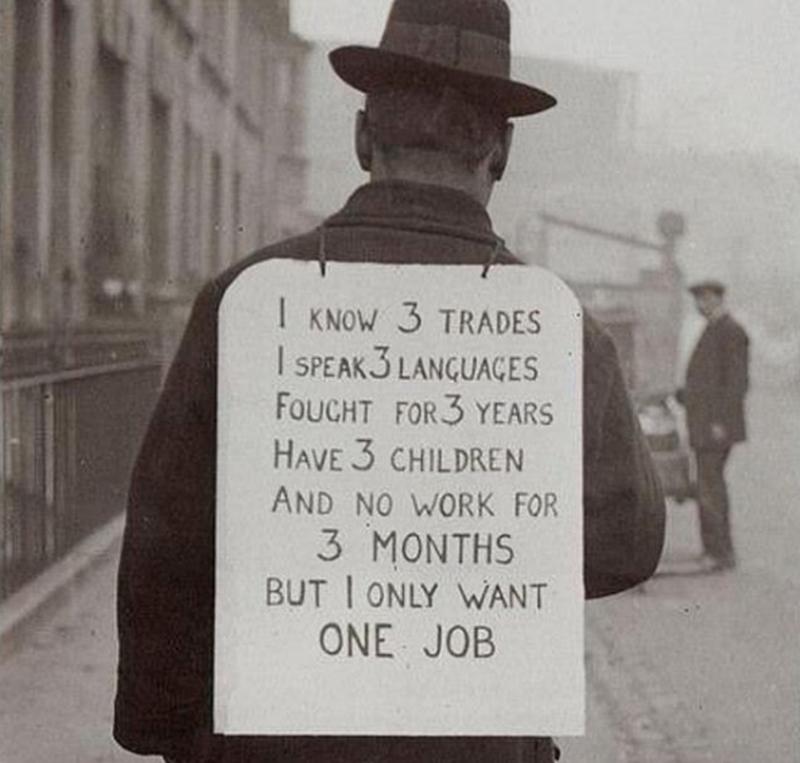 Despite massive unemployment and stark
economic prospects, American families
aren't willing to give up their cars.

When Herbert Hoover was running for president in 1928, promising voters "a chicken in every pot, a car in every garage," he implicitly omitted millions of families and individuals from this vision of a prosperous future.

Americans living in tiny city apartments and tenements, in sleeping rooms, in sharecroppers' shacks and dirt farmers' shanties, had no garage to be ultimately filled with an automobile. The bulk of the populace, then as before, was essentially ignored and forgotten. What might appear to be a typical campaign promise, then, had an underlying significance that would be passed over by most who heard or read those words.

Economic troubles of unforeseen magnitude would begin a year later. On Black Thursday (October 24, 1929), the stock market crashed, resulting in a decade of uncertainty, hardship, impoverishment, and fear for the future.

Ironically, though, the Great Depression turned into a boom time of sorts for automobiles – used ones, that is. Many people who'd been carless through the Twenties became motorists for the first time during a period of economic turmoil. Millions more kept their old buggies running and weren't about to give them up, as discovered by sociologists Robert and Helen Lynd in their study of Middletown (actually Muncie, Indiana) in the late 1920s. "We'd rather do without clothes than give up the car," said one mother of nine children. "I'll go without food before I'll see us give up the car," another woman emphatically explained to the Lynds.

Residents interviewed in the midst of the Depression for the follow-up study, Middletown in Transition (1937), seemed no less attached to their automobiles, whether they possessed an antique flivver or a spanking new Packard Eight. A rural family might lack a bathtub, deeming it more important to possess an automobile.

Cars were becoming more streamlined through the early and mid-1930s, as well as more reliable. By mid-decade, most automobiles were gravitating away from squared-off profiles and toward more curvaceous teardrop shapes.

Technical developments in the 1930s were starting to change the face of motoring, including the adoption of V-8 power by Ford: the famed "flathead" engine. Most notable of all was the gradual path toward the automatic transmission, with stops at Reo's Self-Shifter and GM's Automatic Safety Transmission; but the fully automatic device's impact wouldn't be felt until years later.

Click here for comprehensive history of the automatic transmission.

Shaking out of the automakers continued. Well-known nameplates were disappearing practically every day, narrowing the choices for new vehicles. And for the used cars that they transformed into after a year or two on the road. During the Depression period, Cord, Auburn, Reo, Terraplane, Essex, LaSalle, Duesenberg, Detroit Electric, and so many more makes joined their departed cousins as fodder for the automotive history books, decades later.

Continued growth in adoption of "easy" installment payments made a substantial difference in ownership possibilities for middle-class families. Time payments also aided more fortunate members of the working class, who managed to remain employed through the Depression years. By the mid-1930s, 57 percent of new cars were being sold on time. Sales of auto insurance, too, rose during the Thirties decade.

Used-car sales followed a similar pattern, bottoming at 2.0 million in 1932, but then topping the 1929 record in 1936, with 5.4 million sold. As summarized in The Price of Automobiles (1934), "now cars are partly paid for with used cars, and most consumers purchase second-hand cars." During 1933, 57 percent of new-car sales included a trade-in vehicle. For every 100 new cars sold, 178 used models went to customers.

Automakers in the 1930s tended to eliminate cheap models, so as not to compete with the used-car market. Some better-off folks didn't use a car enough to justify the cost of a new one, but they still sought a bit of luxury and a classier pedigree with their used-car purchase.

Although new-car prices fell steadily during the early 1930s, from an average of $625 wholesale ($945 retail) in 1929 to $495 wholesale ($725 retail) in 1933, the decline wasn't really great enough to pick up many additional buyers. Wholesale prices crept up gradually, not exceeding the 1929 value until 1940, when military preparedness was already underway. Average retail prices, as computed by Daniel B. Suits, followed a similar fluctuation pattern, edging upward after 1933 until the 1940 value of $915 was close to that of the last pre-Depression year.

Under the National Recovery Administration (NRA) code, dealers were obligated to charge the full list price for every new car sold. Traded-in vehicles also earned a specified price. Those requirements disappeared when the NRA was declared unconstitutional by the Supreme Court in 1935. While active, the NRA had killed scrap drives, but they were revived later in the decade, in different forms, promoted as a citizen's quasi-patriotic duty.

By 1936, some 54 percent of families possessed a vehicle of some sort. A year later, Forum magazine referred to a "national obsession with the automobile," noting that the auto industry got at least half of surplus family income (beyond necessities). Spending on cars was said to be "second only to food."

According to another estimate, in 1937, one-fifth of total retail spending was going to auto-related items. The number of gas stations and repair shops doubled during the Depression (though not all necessarily did big business).

Time magazine reported in 1938 that one-third of motorists had never owned a new automobile. Fortune issued a considerably higher estimate: that six out of 10 car owners had never driven home a new model. Either way, dealers had plenty of used cars available to satisfy the still-carless.

Public Opinion reported on a 1935 survey, advising that three-fourths of men and 80.6 percent of women said a car was a necessity. In 1937, 27 percent of respondents said they preferred a car for long trips, while 41 percent would rather take a train and a surprising 22 percent leaned toward air travel.

Summing Up: Staying Afloat in the Depression Years

Confusion and uncertainty reigned during the first years of what came to be called the Great Depression. Logically enough, car sales bottomed in 1933 (conceded by all authorities to the rock-bottom year of the Depression era), just as Franklin D. Roosevelt – commonly referred to as FDR – took office as President. Not all of his policies and proposals worked as hoped, or survived the collapse of the NRA. But it was a time for bold moves, and the nation managed to initiate a gradual upward trajectory. Progress halted in 1937-38, then recovered; but the Depression didn't really end until America entered the Second World War, and wartime production gave the economy a sizable jolt.

How is it possible that, in a time of severe economic depression, auto ownership did not shoot to the bottom and stay there? People cut back on nearly everything else. They had to.

Average wages fell sharply between 1929 and 1933, but rose a bit the next year, to $837 per week. For 1935, as the economic picture continued to improve slightly, the average annual income of families and single individuals reached $1,502. In that year, an entry-level laborer could expect to receive about 45 cents per hour.

Despite the sunken economy, in 1933, the average amount borrowed in an installment contract for a new car was a hefty $516. Used-car contracts averaged $220.

"For a fixed number of dollars," wrote Albert Abrahamson in The Price of Automobiles, one may purchase expensive cars of ancient vintage or cheap cars of recent manufacture." More specifically, they vary from a few dollars paid to a junk man to a price somewhat below the delivered price of the most expensive car." In 1934, they "range all the way from a point slightly above zero to thousands of dollars," averaging somewhere between $200 and $300.

All of the economic trends had little impact on the ordinary workingman, to say nothing of the millions of unemployed. No one could take advantage of the falling price of a Ford or any other conveyance, or any other commodity, if he had no job.

The rather minimal drop in vehicle ownership – and actual increase from 1933 onward – can only be accounted for by the used car. Automakers might have still considered the used car to be something of an annoyance, to be tolerated. But even cash-strapped, often jobless families realized that their few dollars tucked into the cookie jar just might be sufficient to purchase a rickety machine, and hope that it wasn't quite on its last legs as yet. Even more than in the Roaring Twenties, jalopies rounded out the used-car picture.

© All contents copyright 2022 by Tirekicking Today