James M. Flammang, author of 30 books (including
six for children), is at work on several more,
including the title described below.

An independent journalist since the 1980s, Flammang
specialized in the automobile business. During
2016, he turned away from cars and into more vital
topics: work/labor, consumer concerns, and especially,
the emerging outrages of the Trump administration. His
website, Tirekicking Today (tirekick.com) has been
online since 1995. 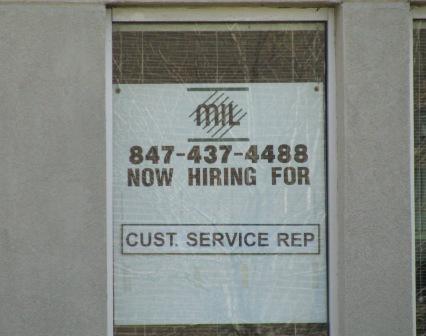 Our biggest myth, and one of the most dangerous:
that there's a job out there for everyone.

Our biggest myth: That there's a job for everyone who wants to work

As the financial crisis of 2008 edged into 2009 and beyond, the job market looked bleaker than it had been in decadespossibly the worst since the Great Depression of the 1930s. College graduates couldn't find jobs. Neither could factory workers, office toilers, folks with professional degrees and licenses, or thoroughly-experienced skilled workers.

How could this be? Why can't the richest nation in the world (a status that might not last much longer) keep all of its people employed?

Because the era of maintaining the fiction that theres a job for everyone is over, thats why.

As novelist B. Traven put it decades ago in The Treasure of the Sierra Madre, there's no shortage of people who insist that if you want to work, a job is out there somewhere waiting for you. Unfortunately, that person never has a job to offer himself. Neither does he know of anyone who might have a job available.

Despite the seeming inability of economists, political leaders, business analysts and sundry experts to come up with believable reasons, much less solutions, the answer is actually quite simple: Not only are there insufficient worthwhile jobs for everyone, there aren't even enough marginal jobs for every person who wants one, and needs one. As for rewarding jobs that pay a living wage or better, forget it. Those days are gone, never to return in the foreseeable future.

This isn't a new phenomenon, by any means. The seeds of this disastrous course have germinated for years. As the logistics of work changed, especially with the development of computer-based technology, the system that provides workers failed to keep pace. As a result, the number of people who'd like to be working but can find nothing continues to escalate. The financial debacle that began in 2008, and continues to linger, has merely added fuel to a fire that was already well-stoked.

Saying there aren't enough jobs definitely does not mean there aren't enough tasks to be done. In fact, the nation's infrastructure, the public's health and social welfare, are approaching crisis status. Help is needed, not tomorrow or next year, but immediately. Yet, the system is unable to organize all those activities into a logical and cohesive structureone that takes into account the tangible abilities, valuable experience, useful intentions, and true desires of the people who might be able to accomplish those tasks. Today, plenty of high-tech jobs go begging, with no applicant stepping forward. Why? Because the number of working-age people with suitable skills has not been growing, due in large measure to cutbacks in education.

Since the election of Barack Obama in 2008, too, the Republican opposition has moved steadily rightward, starting with the Tea Party themes of relentless cutbacks on public services, no matter who is hurt in the process. As a result, the chance of getting more funds for public works projects in the near future looks meager indeed.

Clearly, an entirely new approach is needed, to reevaluate what constitutes work, how people can be paid (reaching beyond the traditional paycheck), and how undone tasks might be appropriated fairly and usefully. Don't expect movement in that direction anytime soon, though. Despite its deficiencies, the current relationship of employers and employees is so tautly established, so firmly entrenched, that it would probably take a disaster to loosen its grip.

Then again, the national and global financial calamity that started in 2008 had the makings of just such a disaster, capable of triggering real change. Unfortunately, the change thats come about has gone almost completely in the wrong direction. By 2011 and into 2012, the economy had improved; but those who had been out of work for long periods may as well resign themselves to the fact that no one is ready and able to help. Sorry, no job for you. And if many politicians on the right get their way, unemployment benefits and other governmental assistnce to help ease the personal financial frenzy will be eradicated in the name of fiscal reform.

Until that true economic disaster happens, and we can start to look at work with fresh insights, tangible steps can at least be taken to make a difference in the short-term. Step One should be obvious, yet has failed to establish a worthy foothold. In a world where computers can help organize all sorts of trivial information and coordinate so many aspects of daily life, why aren't they being used intensively to match people with needed tasks? And, looking a step further, to arrange for the actual accomplishment of those tasks, along with suitable payment for completing them?

Thus far, little more than baby steps have been taken. Sure, the Internet has made it possible for people to apply to dozens, hundreds, thousands of potential employers in an instant. But it hasn't altered the basic principles of evaluating and hiring. If you're among the mass of people last hired, first firedeasy to reject in the first placeonline hiring isn't doing you a bit of good. Witness the job-seekers out there who've been without work for months, indeed yearsdespite making use of all manner of online applications and networking possibilities.

Full-scale computerization could send people onto truly compatible career paths, with considerably less fuss than the usual hit-or-miss methods. It could correlate people who have specific skills, knowledge, desires, and interests with organizations that have equally specific needs.

Even more important, intensive usage of the Internet, including imaginative expansion of the social networks, could make it possible to provide work to people who need money right nownot tomorrow, not at the end of the pay period, but today. Especially in difficult economic times, plenty of people with tangible skills and experience are out there, in dire need of some earnings right this minute. Many lost their jobs months, even years, ago. They may have given up looking for a replacement position. But their needs haven't shrunk at all. If anything, they've probably increased as those forlorn folks try to pay back debts or simply stay afloat economically.

In order to begin to make any impact, we need to finally get away from the outmoded notion that job interviews exist for weeding out "undesirable" applicants. That negative approach, which consigns countless job-seekers to the scrap heap over and over, must be replaced with a positive one: that you're primarily trying to find workers to get specific jobs done, not provide them a career path with perks. In other words, applicants for "career" positions need to be treated entirely different from those who simply need work, and need it nowand are capable of doing it.

Look around, and you see how many jobs are now being doneat least partlyusing computers. Does everyone engaged in such tasks have to be present in a physical office, showing up each morning at 9:00 and leaving at 5:00? Of course not. Countless duties could be performed by high-tech temporary laborby people with skills, who are currently out of the traditional job market, whether by choice or chance.

Apologists for the system might respond that plenty of workers are now doing their jobs from home, at least part of the time. True enough; but that's just a tiny beginning, compared to what's feasible. Those who do work that way are still hired (and fired) in the time-honored manner, paid in the long-established way, and scrutinized carefully by their supervisors, whether physically present or not.

What should matter is the end result: either the work is correctly done or it's not. Instead, traditional work patterns continue to emphasize the milieu of work, more than the successful achievement of it.

Whenever a project can be broken up into separate tasks, each of those elements could conceivably be assigned to a person who has no career plans, who threatens no one's job security or longevity, who wants nothing more than to complete the task at hand and be paid for itright away, not at some future date.

What's the biggest obstacle? Beyond the obvious logistical issues involved in laying out work assignments in such a way, the big barrier is bosses. They want to exercise their cherished right to stand over each and every worker. This couldn't happen if work tasks were spread out.

As an example, Task A might be done in-house, in the usual way, by a career worker. Task B could be accomplished at home, by a stay-at-home mom or dad who needs the money and wishes to exercise formerly-learned skills. Task C might be in the hands of a student, working at an Internet café, eager to put in a few hours of even tedious computer work, in order to be rewarded with some much-needed cash. Task D could be done by a fellow who lost his job months ago, is down to nothing, but is willing to sit at a computer and do repetitious, mundane workperhaps in a public library or other institutionin order to earn money to survive another day. He doesn't have to love the company, and management doesn't need to see his as a potential lifetime employee.

Of course, there's one additional obstacle: the Internal Revenue Service. Even though the amounts involved would be small, tax agents aren't likely to overlook the possibility that some of these quickie workers might not pay the appropriate income tax for their earnings. In a near-future world where work takes new forms, even the IRS will have to adapt.

Note: Expanded and additional excerpts from Absurdities will be posted later. Most excerpts are intentionally incomplete at this point, meant to serve mainly as examples.

Publishers: For further information on availability of Absurdities and all other book projects from James M. Flammang, editor of Tirekicking Today (www.tirekick.com), please e-mail us at JF@tirekick.com.

© All contents copyright 2012-13 by Tirekicking Today